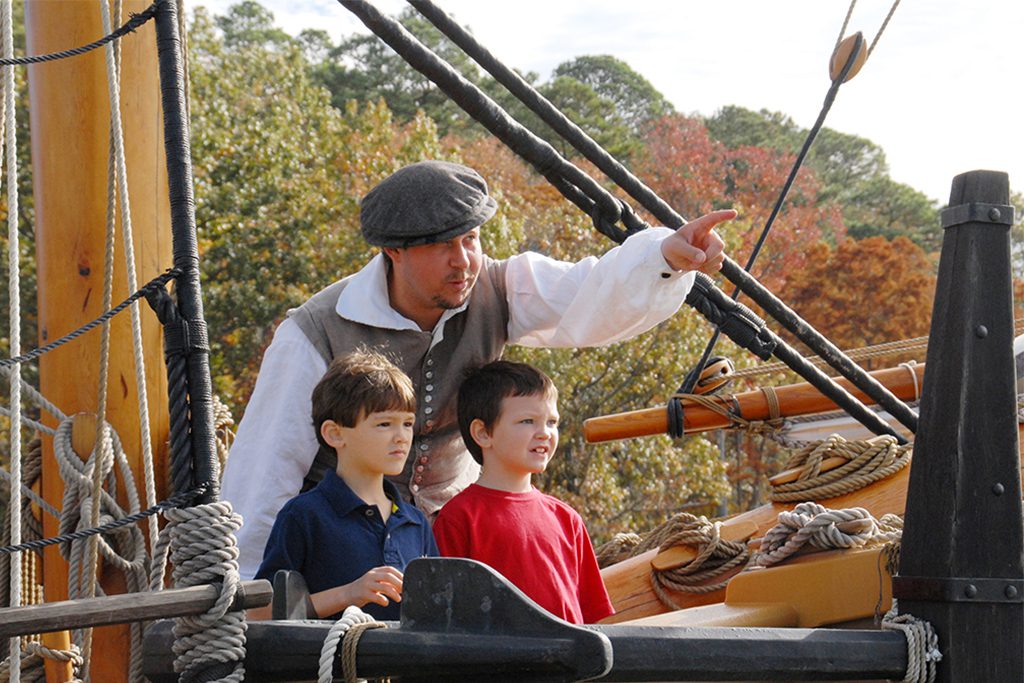 At Jamestown Settlement, a living-history museum of 17th-century Virginia history and culture, discover the story of America’s first permanent English colony, founded in 1607, and the ensuing convergence of the Powhatan Indian, English and Angolan cultures, vividly recounted from its beginnings in the Old World through the first century of its existence through film, expansive indoor gallery exhibits and outdoor living history.

Don’t Just Visit the Past, Get Into It with Immersive Films and Gallery Exhibits

A visit to Jamestown Settlement starts in the Robins Foundation Theater with a docudrama film, 1607: A Nation Takes Root, that presents an overview of the first two decades of the Virginia colony. A “great hall” spanning the length of the museum’s exhibition galleries provides, with illustrations and text, a chronological journey from 1600 to 1699, when the capital of Virginia moved from Jamestown to Williamsburg. 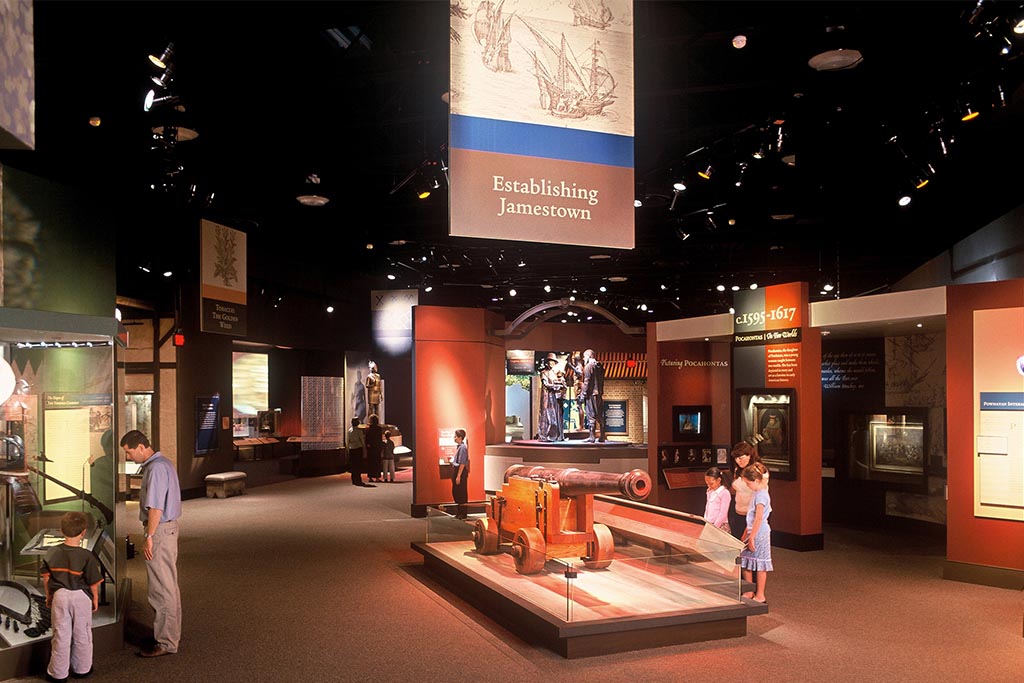 Undergoing enhancements with new technology and an immersive theater to be complete in 2019, the galleries are currently divided into three major sections. The first introduces visitors to pre-17th-century Virginia and provides overviews of the “parent” cultures, second explores the complexity of the relationship between Virginia’s colonists and the native Powhatan Indians, and third provides an overview of the political, social and economic development and expansion of the Virginia colony during the 17th century. Short films describe the evolution and impact of government in 17th-century Virginia and the legacies of Jamestown­ that were the seeds of the United States of America.

Leaving the indoor exhibits, visitors arrive at the Powhatan Indian village, where historical interpreters discuss and demonstrate the Powhatan way of life – illustrating how to grow and prepare food, process animal hides, build dugout canoes, make tools and pottery and weave plant fibers into cordage. The village, consisting of several dwellings, a garden and a circle of carved ceremonial posts, is based on archaeological findings at a site once inhabited by Paspahegh Indians, the Powhatan tribal group closest to Jamestown, and descriptions recorded by English colonists.

Through January 5, 2020, visitors can discover little-known, personal stories of real women in the Virginia colony in the yearlong special exhibition, “TENACITY: Women in Jamestown and Early Virginia,” a legacy project of the 2019 Commemoration, American Evolution™. More than a dozen special events, performances and scholarly lectures accompany the special exhibition. Special events and programs include “Military Through the Ages” in March, “Jamestown Day” in May, “Origins of American Democracy” and “Democracy Weekend” in July, “American Indian Intertribal Powwow” in October, “Foods & Feasts of Colonial Virginia” in November and “Christmastide in Virginia” in December.

A value-priced combination ticket is available with the American Revolution Museum at Yorktown. Call 888-593-4682 toll free or 757-253-4838 for more information, or visit HistoryIsFun.org 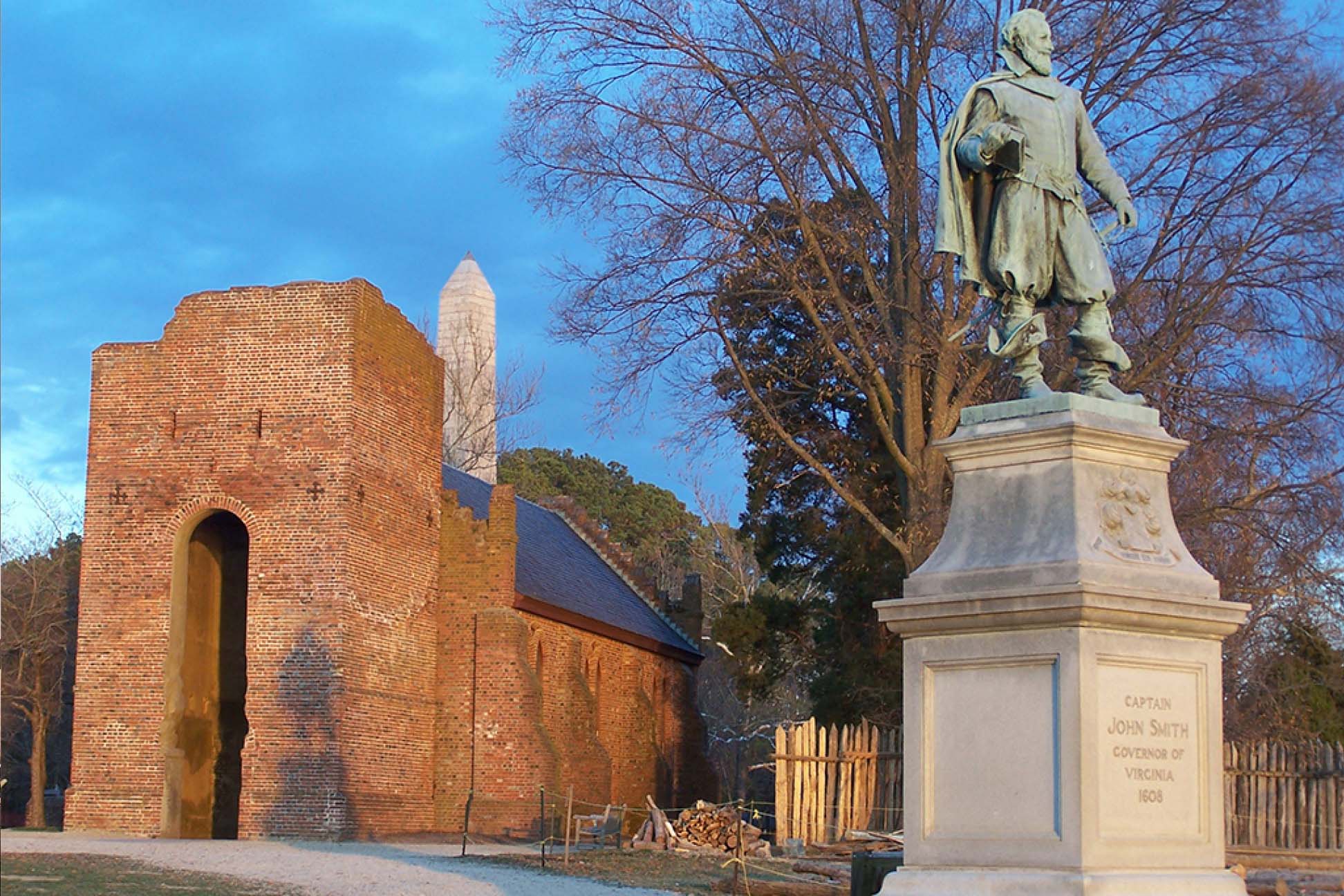 Walk in the footsteps of Captain John Smith, Pocahontas and the men and women who settled England’s first permanent colony in North America in 1607. Experience the actual place where the first representative assembly in America met and the first Africans arrived in Virginia.

Explore the original site of the 1607 James Fort and witness the moment of discovery as archaeologists uncover artifacts from this first settlement. At the Historic Jamestowne Visitor Center, learn about daily interpretive programs, tour the exhibit galleries, shop in the museum store and view a multimedia theater presentation that will immerse you in the sights and sounds of 17th-century Jamestown Island.

Located at the east end of the island, the Nathalie P. and Alan M. Voorhees Archaearium, Jamestown’s archaeology museum, displays more than 2,000 artifacts from James Fort.

After a visit to the Archaearium, enjoy lunch on the banks of the James River at the Dale House Café. Spend time soaking up the natural environment of the island, where you can observe bald eagles, blue herons and white-tailed deer among the indigenous wildlife that thrive in the area.

Throughout the year, you can meet some of the early settlers during eyewitness programs and living history tours. Events are held on site to commemorate important dates in Jamestown’s history. 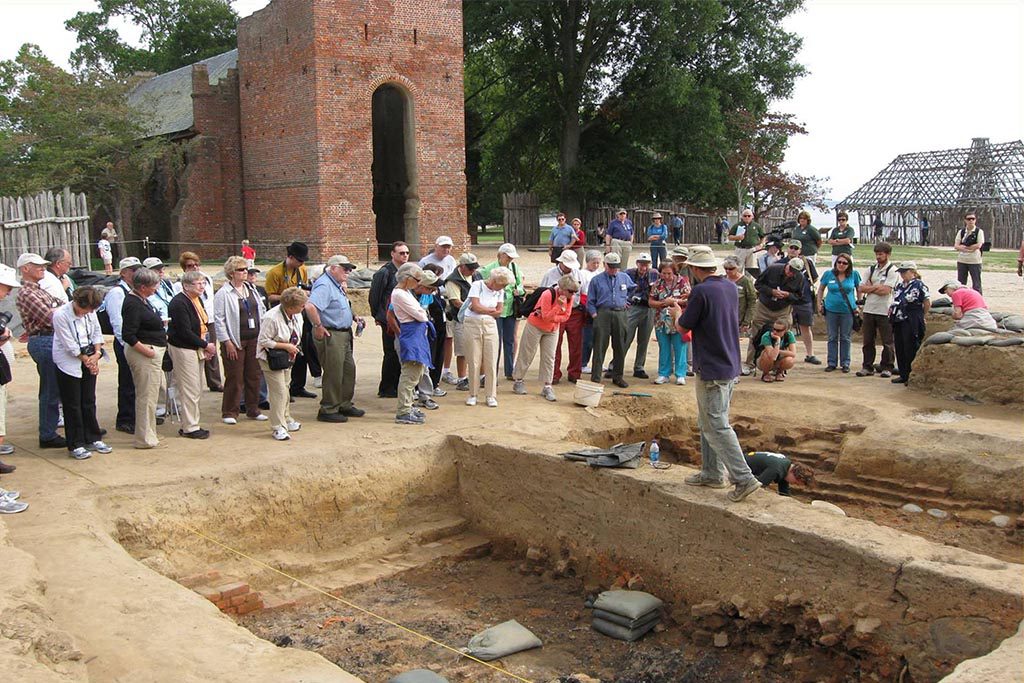 After departing the Visitor Center, continue your visit with a trip along the Island Loop Drive, a five-mile, self-guided driving tour, where you can explore the natural environment. Exhibit signs along the drive explaining how the early Jamestown settlers harnessed this environment to help them survive. Take the time to park at Black Point, on the island’s eastern tip, and walk the footpath to the James River for a spectacular panoramic view.

Complete your visit with a stop at the Glasshouse of 1608 to observe artisans practice glassmaking, one of the earliest industries attempted on the island.

Historic Jamestowne is jointly administered by the National Park Service and The Jamestown Rediscovery Foundation (on behalf of Preservation Virginia) and preserves the site of America’s first permanent English settlement.

Admission to Historic Jamestowne also includes admission to Yorktown Battlefield and provides unlimited access to both historic sites for seven consecutive days. The entrance gate is open from 8:30 a.m. to 4:30 p.m., and the Visitor Center is open from 9 a.m. to 5 p.m. (closed Thanksgiving Day, Christmas Day and New Year’s Day). Visitors may stay on the site until dusk. For admission prices and event information, visit HistoricJamestowne.org or call 757-856-1250.